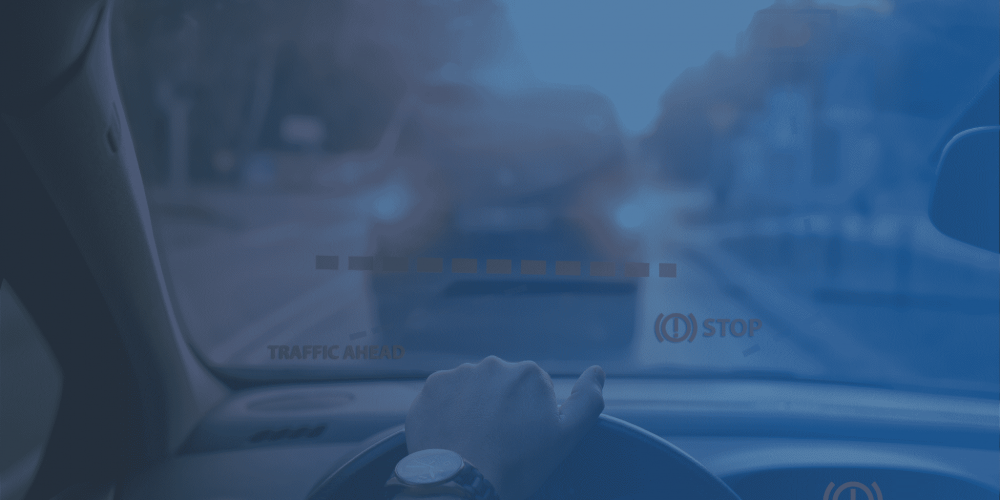 Manufacturers quickly got to work. Since the agreement was fostered, nine automakers are installing AEB in all new passenger vehicles and four have equipped more than 75 percent.

But what is AEB and how does it help prevent crashes? In this article, we will explain AEB, how it works, its limitations, and the need for AEB calibration.

Currently, only low speed AEB with Forward Collision Warning is included in the NHTSA challenge to automakers.

Research has found that vehicles equipped with AEB technology are much less likely to rear-end other vehicles. The combination of AEB and FCW reduces crashes by 50 percent, while vehicles with FCW unaccompanied by AEB still see a reduction of 27 percent.

Even if an AEB system cannot avoid a crash, it can still decrease the severity by reducing the vehicle’s speed. The Insurance Institute for Highway Safety (IIHS) conducted a demonstration between two vehicles: an AEB-equipped Mercedes-Benz and a stationary Chevrolet. When the AEB-equipped vehicle collided with the stationary car its speed was reduced by 13 mph — resulting in $5,700 of damage. The stationary vehicle, under the same conditions, was unable to reduce its’ speed and the collision rendered $28,000 worth of damage — a complete loss.

As stated by NHTSA Deputy Administrator James Owens, “Automatic emergency braking can help prevent or reduce the severity of crashes, which also reduces the risk of injury.” That’s why the progress made by this agreement is so significant.

How does AEB prevent/mitigate collisions?

AEB uses forward radar sensors and/or camera sensors to detect an impending forward crash with another vehicle and respond accordingly to avoid or reduce the impact of the collision. With the addition of FCW, the system can alert the driver to an impending crash and then provide automatic braking.

Once an impending collision is detected there are a few responses that take place to avoid or lessen the effects of a crash:

If an AEB system is equipped with FCW, it will work together with that system to alert the driver to a dangerous situation. Lights, sounds, and/or vibrations are triggered to grab the driver’s attention.

In the event a driver engages the brakes, but not enough to effectively avoid the crash, dynamic brake support kicks in to supplement the driver’s braking and evade an accident.

If the driver does not respond or take any action, crash imminent braking engages to slow or stop the vehicle.

Although not every automatic emergency braking system has these features, some advanced systems take additional action to prevent injury in the event of a crash. For example, Mercedes-Benz’s Pre-Safe system tightens seat belts and adjusts seat positions and headrests to reduce the chance of injury if a possible collision is detected.

Where the Future of AEB Stands

This voluntary approach to standardized implementation has had a significant impact. Currently, there are about 5 million more new vehicles being manufactured a year with AEB functionality than there were previous to this agreement.

Though the progress made is significant, it’s important to note that this is an agreement, not a rule. As you can see in the chart above — there are still 5 manufacturers falling behind. And although standardization is a huge win in driving safety, there are still some challenges that must be faced.

AEB Systems are not Foolproof

Although AEB systems can step in to aid a driver in many cases, it’s important to remember that they don’t replace the need for an attentive driver. A driver is still responsible for stopping a vehicle in time.

There are three main limitations of AEB:

Adverse weather conditions, haze, and even glare from the sun can affect the sensors within the AEB system’s performance. Newer systems use many types of sensors to overcome this issue, but there are still scenarios where AEB is affected.

Not all AEB systems are created equal. Some only work for vehicles and not pedestrians. Now that AEB is becoming more common and technology is becoming more advanced pedestrian detection is too. But it’s important to keep in mind that a car with AEB is not necessarily programmed to brake for pedestrians.

Every AEB system is slightly different, as determined by the original equipment manufacturer (OEM) that designed it. Some AEB systems are built to brake at speeds slower than 30km/h, whereas others can support higher speeds of 70km/h. Although the vehicle’s system will likely be able to detect an imminent collision no matter the speed, the braking capabilities vary between vehicles. This is why the addition of FCW in this agreement was imperative.

As vehicles continue to become more complex, so does repairing them. AEB is a type of Advanced Driver-Assistance System (ADAS). This group of safety features relies on powerful technology and sensor data to determine conditions surrounding the vehicle and respond accordingly.

It is critical that an AEB system is calibrated in several common circumstances — after collisions and fender benders, changes in alignment, and even windshield replacement. If the system’s camera or radar sensor is not correctly aligned, then the automatic braking may engage when not needed, or worse — not engage when it is.

Although the adoption of AEB on a widespread basis is a significant achievement, it’s important that the future includes a plan for maintaining these systems. Research by adasThink tells us that many repair shops are still not performing calibrations. In their study, they found that shops only identified the need for calibration 12 percent of the time.

This finding puts into context the important part repair shops play in AEB implementation. These systems must be properly calibrated to ensure their functionality. Now that almost all new passenger vehicles include AEB technology, calibration must become a core part of the repair process.

Read More: Is Your Auto Shop Prepared for ADAS?

All things considered, the progress that has stemmed from this agreement between the NHSTA and automakers is something to be celebrated. The quick deployment of widespread Automatic Emergency Braking means that lives are being saved and injuries that otherwise may have occurred are avoided.

At Car ADAS, we’re fulfilling our mission of making the world a safer place to drive by addressing one of the aspects that is most necessary for this initiative’s success: ADAS calibration. We are the calibration business implementation expert. Our value propositions include business analysis, training, implementation, and continuous support. Contact us about making calibration a part of your shop’s process.

Learn about owning your own ADAS calibration center.