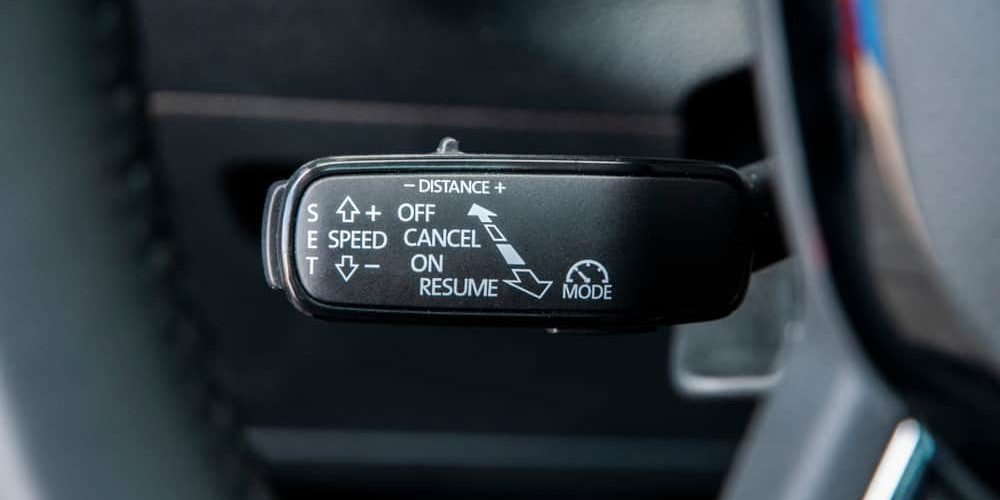 What is ACC in a car?

What is Adaptive Cruise Control?

Adaptive cruise control or Active Cruise Control (ACC) is an advanced driver assistance system (ADAS) that automatically adjusts a vehicle’s speed when there are slow-moving vehicles ahead, with the aim of maintaining a safe following distance. When the road ahead is clear, ACC automatically accelerates to your pre-set speed. Adaptive cruise control is ideal for highway speeds.

ACC is a major component and precursor of fully autonomous vehicles. According to SAE, Driving Automation Level 1 driver support features provide steering OR brake/acceleration to the driver while the jump to Level 2 requires features that provide both steering AND brake/acceleration to the driver. On its own, ACC is a Level 1, but when combined with another driver assist feature that steers, your vehicle reaches Level 2 on the Driving Automation scale – a step closer to fully autonomous driving.

How does Adaptive Cruise Control work?

Most (but not all) current forms of this ADAS use radar as their main source of information. A radar sensor mounted in the front of the vehicle is used to analyze the road ahead. It does this by emitting radio waves and measuring how long they take to return to the ACC sensor. A few internal calculations and your vehicle can tell the car’s distance and speed. Data from the radar distance sensors and the vehicle speed sensors are used to adjust your speed and keep your car a set distance from the one ahead of you.

Most automakers have their own version of adaptive cruise control. Not everyone uses the same names for their ACC system. Here are a few industry terms that are all different names for ACC:

Beyond the similar naming, there are several different features that adaptive cruise control is often bundled with to provide sensor fusion. One example of this is a feature called ACC with Stop and Go or ACC with Traffic Jam Assist. This adds the ability to come to a complete stop via automatic braking and then re-accelerate to the car’s set speed as traffic moves. All the while, data from sensors is used to keep a set, safe distance from cars ahead when you encounter heavy traffic.

Because it’s not an autonomous car, those with stop and go capabilities will only “go” again within three seconds if traffic flow allows. If it’s longer than three seconds, driver action is needed to re-engage the system.

Adaptive Cruise Control works well with others. As previously mentioned, when adaptive cruise control is combined with an ADAS with steering capabilities like lane centering and proactive lane keeping assist systems, your car is considered a Level 2 on the SAE autonomous driving scale — meaning that the vehicle can accelerate, decelerate, and steer on its own — under very specific conditions, including initiation speed and weather. While it’s a step up in terms of driving automation, for safety, a human driver is still required to supervise constantly, including steering, braking, or accelerating.

Some ACC systems offer advanced traffic sign recognition, while others utilize GPS speed limit data. These optional ACC features help to combat the use of ACC technology to speed.

There are many different flavors of ACC. Names, tech, and bundled features make the automotive landscape — dotted with endless features, diverse names, and function variations — a bit tricky to navigate. To help you recognize ACC features, here are four automaker examples.

Ford is one example of an automaker with adaptive cruise control. Here’s how Ford’s describes its system and capabilities:

“Available on select Ford vehicles is a series of Adaptive Cruise Control (ACC) features employing advanced radar and camera technology. ACC lets you set a cruising speed and distance from the vehicle ahead of you. When it slows down, you automatically do too; when traffic picks back up, you resume your preset speed and distance. Then comes ACC with Stop-and-Go, which enables you to come to a complete stop when the vehicle ahead stops. Now add Lane Centering, which scans the lane markings to help you stay in your lane if the system detects you’re drifting out of it. And that’s not all. Now there’s Intelligent Adaptive Cruise Control, which includes all of these features plus new Speed Sign Recognition that can automatically adjust the set speed of your vehicle to the posted speed limit.”

In the Honda Sensing ADAS package, the automaker offers ACC on many 2021 models with what it calls Low Speed Follow. Here’s how Honda describes it:

“Cruising on the open highway has never been easier! Honda’s Adaptive Cruise Control (ACC) with Low-Speed Follow lets you set your cruise speed and interval behind a vehicle detected ahead, and then maintains that interval by braking your vehicle or applying the throttle.  And the Low-Speed Follow function can bring your vehicle to a complete stop when a vehicle detected ahead slows to a stop, and it lets you resume operation by pressing a button or the accelerator.”

Hyundai offers adaptive cruise control, including on the Santa Fe. Here’s how the automaker describes it:

“While traveling at a speed set by you, it uses radar to maintain a safe distance from the car ahead. When the system slows the vehicle to a stop, it will reactivate if the vehicle in front moves within 3 seconds.”

“Your “co-pilot” for highway driving, when actively engaged with Smart Cruise Control or Lane Following Assist, this smart convenience automatically helps keep you centered in your lane and traveling at a safe distance behind the car ahead. Not only that, it also can keep you driving at the right speeds, automatically setting your pace based on GPS and highway data.”

As part of Subaru’s Eyesight Driver Assist Technology Package, ACC is standard on many of the brand’s 2021 models and optional on the rest. It uses dual forward-facing color cameras mounted near the rearview mirror. Here’s how Subaru describes its ACC system in a promotional video:

“With adaptive cruise control, eyesight can help you stay with the flow of traffic. When you set cruise control, you can select from up to four present following distances. EyeSight watches ahead and if it detects traffic is slowing, adaptive cruise control adjusts your speed accordingly to keep your selected distance. Once traffic starts moving faster, it can automatically accelerate back up to your set speed. It can even work in stop-and-go traffic.

For some, it’s less worry about adjusting cruise control. For others, it’s like having an extra set of eyes on the road.”

Drivers should know that they are responsible for what happens when they are behind the wheel. Every company makes sure to include an asterisk and notice that drivers are still needing to be actively engaged in driving. Some drivers are using ACC to speed. A study of 40 drivers by the Insurance Institute for Highway Safety (IIHS) found that they were more likely to speed when equipped with ACC.

ACC works well in clear day and night driving, and in light weather. However, if there is fog, heavy rain, or snow, it won’t work. Additionally, if dirt, snow, or ice are on the sensors, they won’t work. ACC also has trouble on winding roads.

With or without ACC, it’s important to always leave more space during poor driving conditions, including inclement weather.

ACC is one of the most common ADAS features in vehicles today. Like other ADAS systems, ACC needs to have sensors recalibrated after a collision and many vehicle services like windshield replacement. ADAS calibration keeps ACC systems working properly.

What is adaptive cruise control calibration?

During the ADAS calibration process, the camera, lidar, and radar sensors that inform your vehicle’s actions are re-aligned to improve or re-establish sensor accuracy.

Getting a car calibrated takes drivers knowing about it and recognizing the warning signs.

For drivers, the biggest sign that you need a car calibration is a recent collision. Other circumstances that necessitate ACC calibration include any time you repair or replace something nearby the location of a sensor. Another sign would be an overly sensitive ACC system, even when you have changed the settings (where possible). Here are some related warning messages that may signal it’s time to get an ADAS calibration:

When a car comes into the shop, techs need to know when to order or perform ADAS calibrations. They also need to understand their importance. If calibrated incorrectly, ACC systems may have following distance settings that drivers aren’t used to. They can also make the systems overly sensitive, or not sensitive enough.

Every new model year brings more and more ADAS-equipped vehicles to the streets. Cars need to be calibrated after collisions, and any repairs that may affect sensor alignment. If you want to capitalize on this impending influx of needed calibrations, Car ADAS Solutions can help. We are at the forefront of the ADAS calibration services industry. We provide turnkey ADAS calibration solutions with framework, specialty software, training, and support, built-in. Contact Car ADAS Solutions today!